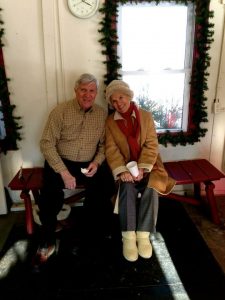 What were you doing in 1958? Most of you probably weren’t even alive. I wasn’t even a thought back then but I do have two lovely people to thank for my existence. My grandparents just celebrated their 60th wedding anniversary. Holy cow! 60 years is more than half a century! What a beautiful commitment? My grandmother has been calling 2018 “the year of the zero.” My dad turned 60. My uncle turned 60. My cousin, Addison turned 30. My grandma is turning 80 and it’s my grandparents 60th anniversary. The year of the zero and everything for which to be grateful.


I was talking to my cousin, Curran, on my dad’s side the other day about this celebration we are doing for my grandparents on my mom’s side. My grandparents are renewing their vows and having a lunch with the entire family. All four kids, their spouses, and the 13 grandchildren we’re all invited to celebrate this wonderful chapter! Usually, you’d see some labs running around at these family gatherings too. Curran and I sat and reflected for a moment on how long 60 years really is. We couldn’t believe all that has transpired with the family since then.


I called up my grandfather on Thursday morning. “Hey Grandpa, how’s it going?”

“Hanging in there,” he said.

“What do you mean, hanging in there?” I questioned.

“Well, it’s a pretty crummy day outside but there’s a lot of sunshine in this house today. It’s our 60th anniversary,” he replied.


“Wow, congratulations! You guys have probably been through a lot together, Grandpa,” I said.


“You can say that again,” he replied with a chuckle.


My grandma wasn’t even there to overhear any of this! My grandfather proceeded to tell me how Nanny was going to get her hair done because it was a special day and they were just so excited to celebrate. They were going to bring out a special bottle of wine and have a delightful dinner that evening. First, they had to babysit their youngest two-year-old-granddaughter, Sylvie.


“Jamie (my aunt) probably didn’t want to burden us with babysitting Sylvie today, but to me, that is a gift!” Grandpa said. “All of you grandchildren are such joys in our lives.”


Tears had spilled from my eyes at least two or three times at this point in our conversation. I continued to ask him about Nanny. 60 years ago, she charmed him with a pie she told him she made herself. Years later, he found out her mother made it and she took the credit. She has definitely made up for that single pie in her cooking over the years.


“Oh, she is a wonderful cook. Sometimes I feel bad because she is always doing the cooking. And she loves to share the foods she makes. There is not a single dish she makes that doesn’t get shared with friends and family,” he said.


“It’s probably one of her greatest joys to share those foods she makes with everyone,” I said.


“Yeah it definitely is. But it doubles our food bill,” he said with a laugh. This makes sense that he answered “finances and budgeting” when I asked what the biggest challenge was over the 60 years of marriage.


I spoke with my grandma on the phone this morning and asked her the same question about challenges. She said you have to compromise and you must have patience. Sometimes you have to see both sides of the situation even though you might not agree. When I asked her about what she loves about my grandpa the most, she said, “he is just real. There is no phony stuff about him. He is also a family man, such a family man!” As his oldest granddaughter, I would have to say the same. We all see this in him.


“Okay Claire, I have to jump into the shower. There’s going to be no hot water left,” Grandpa said to me. He was probably more concerned about the water bill going up than the hot water running out.


“Wait, what do you love about Nanny most?” I asked my grandpa.


“Her chuckle. She gets this laugh that is just wonderful. She talks on the phone a lot and I notice when she talks to a couple of her friends, this chuckle really comes out more than other times. Sometimes I’ll look at her from across the room when we’re at a party and see her chuckle and it just makes me so happy. In fact, I think that’s why I married her,” he said.

I stopped by there last week and my grandma said they always kiss each other before they go to bed and when they leave the house. “You just never know,” she said. Their love shines through for each other and every single person with whom they come in contact. Every call with them ends with a “love you more, and I can because I’m older” or a “love you back.” Nanny and Grandpa, happy 60th anniversary. Love you the same.