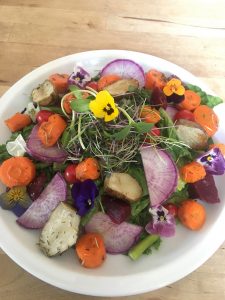 Did you know every year, 6 billion pounds of food goes to waste? That is insane to me. Imperfect Produce is trying to find a way to fix this. The produce is delivered straight to your door for 30-50 percent less than grocery stores. They only source foods that are considered “ugly” and normally would go to waste. The company sources their foods from quality farms. They are committed to reducing food waste, supporting farmers financially, transparency and honesty.


There are many reasons that make this produce “imperfect” but honestly, it tastes perfectly perfect! You can customize your box and take out items that you couldn’t imagine eating. You can also add in items you’re curious about. The box can be customized in size, frequency, conventional or organic produce. You can get the box every week or every other week.


Imperfect Produce tries to source as local as possible but they also try to “follow the waste.” You can find out where each item is grown when you pick out your box. If they wouldn’t eat it, they won’t sell it. If you aren’t satisfied, they’ll refund the cost of the item. This food is not being taken from food banks, animal feedlots, or processors. There are 3 billion pounds of produce going to waste each year in California alone. Imperfect Produce donates thousands of pounds of produce to food bank partners across the country. Leftover items that aren’t up to quality standards get donated for animal feed or are composted. They group deliveries based on zip codes so they can make drops all in one day to reduce emissions. They also offer up a recipe in each box. However, Imperfect Produce has all these recipes online so you can opt out of the card if you want to spare a tree.

Here are some of the reasons the produce is considered “imperfect:”

Size: Too small, too big, or too varied. There will be 36 large avocados in a standard case but a medium avocado case will contain 48. Supermarkets will reject produce for it being too small or too large for their standards


Asymmetry: Too misshapen. The supermarkets want to build pristine, symmetrical pyramids to entice buyers. If an item cannot stand up straight, it’s too curved, or too thin, the item gets discarded because of their uniqueness.


Scarring: Too many marks on the skin/peel. Supermarkets want to buy produce that looks beautiful so if it has a little boo-boo, these get tossed too! Sometimes a juicer or processor will show interest in these scarred fruits and veggies but otherwise, they go to waste.


Lack of a consumer market: Too unknown. Demand is another main reason these foods go to waste. Broccoli leaves and the stalk are a healthy and delicious part of the plant. In fact, they make up ⅔ of the plant! Store usually just want the broccoli crowns so these get discarded.


Discoloration: Too different in color from the average. Visual appearance is key in many stores. There are sunburned melons and blemishes on acorn squash. These items get undervalued even though they have the same nutrients and taste.


Surplus: Too many. I got some kale in my last Imperfect Produce box because there was too much of it on the market. Farmers have to pick, chill, package, and ship produce and sometimes it is cheaper to leave them in the field instead of harvesting, storing, and shipping them to market.
Try your own Imperfect Produce here and get $10 off your first order by clicking that link!